Qawalli and the Art of Devotion

Qawwali, the ecstatic music at the heart of Sufism, has traveled the globe for centuries in the mouths, ears, hearts, minds, and, more recently, the digital players and MP3 files of the South Asian diaspora. Resonant with high, clear calls of praise and deep harmonies, qawwali is a part of the Sufi tradition. Through the act of listening—sama’—the Sufi seeks deeper connection with the Divine.

The qawwali performance illustrates the transcendence of local space through aural communication. Both the recitation of the Qur’an and the Sufi invocational hymns affect a transcendence of physical space by invoking the omnipresence of the Divine and the universality of the Muslim Umma.

As noted in Regula Burckhardt Qureshi’s book, Sufi Music of India and Pakistan, “The qawwali medium of performance is subject to three premises, all relating to its power over those who listen to it. The first premise, based on the primacy of God’s word in the Qur’an, and fundamental to all of Islam, concerns the power of the word, and extends to qawwali poetry. The second premise holds that words are effectively applied through the power of repetition, particularly rhythmic repetition as practiced in zikr. The third premise, and the one most fundamental to the qawwali occasion, concerns the musical rendering in which both the word and its rhythmical repetitions are clothed. According to this premise musical sound has the power to stir the soul, and to arouse emotions of love to the point of ecstasy.” (Qureshi, 1995: 107)

The qawwali star of Muslim Voices: Arts & Ideas Faiz Ali Faiz, whose family has been producing qawwali singers for seven generations, exhibits great vocal flexibility and range. He is considered to be one of the world’s preeminent qawwali performers.

In this selection, Faiz Ali Faiz and his Ensemble perform Dar Mast Qalandar, demonstrating the range, versatility and depth of this musical tradition.

For a deeper look at the history and significance of the qawwali tradition, please see:

Qawwali and the Art of Devotional Singing 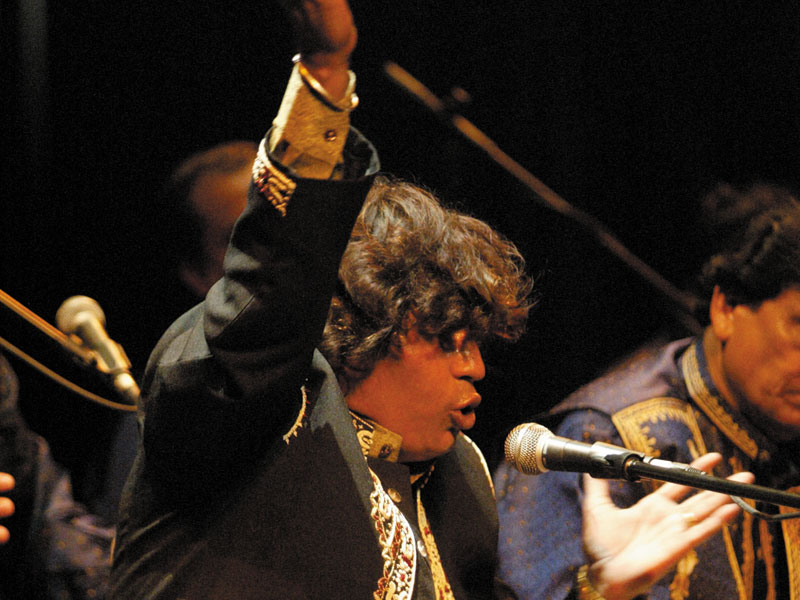 Faiz Ali Faiz and the Power of Qawwali

Watch an exclusive video clip of Faiz Ali Faiz in this stunning example of the qawwali musical tradition.