MJ Akbar and the Search for Common Understanding

M.J. Akbar is a leading journalists in India and a regular commentator on Islam in both contemporary and historical contexts. He is a founder and editor of Asian Age magazine and is also a leader of the magazine Convert, which he launched in 2008. Akbar has written widely on Islam and the Muslim world.

His non-fiction books a biography of Jawaharlal Nehru Nehru entitled The Making of India, a book on Kashmir entitled Kashmir: Behind the Vale. Akbar is also the author of Riot After Riot, India: The Siege Within and The Shade of Swords, a cohesive history of jihad. Akbar's most recently published book is Blood Brothers, a skillfully crafted family saga that covers three generations set against a backdrop of India's evolving political climate and particularly the changing Hindu-Muslim relations.

In the clip to the right, Akbar further considers this process, and the broader goal of the festival Muslim Voices: Arts & Ideas-- the role of the arts to foster deeper understanding, tolerance and peace. 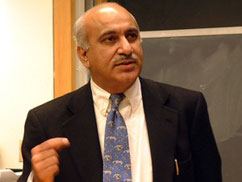