Adam Matta and Kenny Muhammad The Human Orchestra: The Bosses of Beatbox

Beatboxing is a form of vocal percussion-- the art of producing drum beats, rhythm, and musical sounds using the mouth, lips, tongue, voice and more. It may also involve singing and the vocal imitation of turntables, as well as simulation of horns, strings, and other musical instruments.

Adam Matta and Kenny Muhammad “The Human Orchestra” are two giants of the human beatboxing world. Their extraordinary range and exuberant performance is matched only by the masterful control both artists demonstrate. Matta and Muhammad are shaping the next generation of human beatboxing, and they are featured performers in the Muslim Voices at BAMcafe series, performing at BAMcafe on June 13th at 9:30 pm.

“I was influenced by the sounds of my family,” explains Matta. “My father is Egyptian. He wouldn’t speak Arabic much in the house, but when we would go to his sister’s house on Long Island, they would all get together in the party room. They would sing some of the music from when they were growing up in Egypt and Cairo. That sound stuck with me through my life.”

In the following clip, Adam Matta is joined by his father, Seoud Matta, providing beatbox backup to his father’s rendition of a classic Egyptian song, Yagamil.

Contemporary beatboxing is informed by the sounds and arrangements of hip hop, funk, house, but also reaches back to the root of instrumentation. The earliest instruments, Kenny Muhammad explained, came from Africa and India and “were based on the art and instrumentation of the human voice.”

Muhammad’s own inspiration is as varied as the roots of beatboxing. “My mother played a lot of James Brown, Earth Wind and Fire. I grew up on that music,” he explained. “I tried to find a way to duplicate sound. I had no idea what beatboxing was-- it was like whistling to me. Then I heard the Fat Boys when they came out, and that blew me away. All these artists who did something percussive, harmonic with their vocals, they inspired me to take it to another level.”

Listen in as Muhammad takes his own percussive style to another level in this clip from his Seattle Showbox performance:

The artists are two of the New York-based performers in Muslim Voices: Arts & Ideas. “I’m a Muslim,” said Muhammad. “We’re all Muslims if you look at the meaning. Muslim means one who is in total submission to the will of God. We get caught up in labels and that’s the devil’s playground. We have to understand the meaning of these labels and live by the meaning, not by the label.” 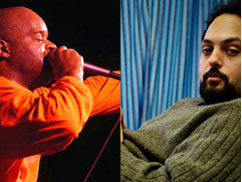 Matta and Muhammad: Together in Beatboxing

Adam Matta and Kenny Muhammad The Human Orchestra are two of the world's leading human percussionists, known as beatboxers. In this exclusive footage, check out a rare sample of Matta and Muhammad performing together.