A vibrant musical tradition based on the mystical branch of Islam, Sufi music seeks to unite listeners with states of transcendence in order to connect with the Divine. Muslim Voices: Arts & Ideas presented a unique pairing of two all-male groups, Aissawa and Al Taybah Ensembles, who took the stage for an evening of entrancing and enlightening Sufi music as part of the festival events.

Established in the holy city of Fes, Aissawa Ensemble, one of Morocco’s most accomplished and thrilling Sufi ensembles, enchants audiences with syncopated rhythms on traditional tabls and bendirs and gloriously dissonant trumpets.

Based in Avignon, Al Taybah Ensemble represents the growing community of Muslim converts in France, whose varied influences enrich their musical language. A guest calligrapher and two whirling dervishes added to their performance, as members of this ensemble raised their voices together in melodious chants.

For a taste of the Aissawa experience, check out The Aissawa Trance Ritual Revealed, featuring the insights of ethnomusicologist Hassan Jouad’s introductory note—together with audio tracks— from the album Les Aissawa de Fes.

For further information and a video sample of the Aissawa Ensemble in performance, please see Sufi Music in Performance: A Closer Look.

Support for the Aissawa Ensemble is provided by the Moroccan American Cultural Center.

Artists
Sufi Music Ensembles
The Aissawa Ensemble Said El Guissi's Aissawa Ensemble is rooted in the holy city of Fes, Morocco. Considered to be among Morocco's most famous and accomplished groups to emerge from the centuries-old Aissawa tariqa, or Sufi organization, the group uses trumpets and pipes to pierce through a barrage of polyphonic drumming, creating a trance-inducing wall of sound. 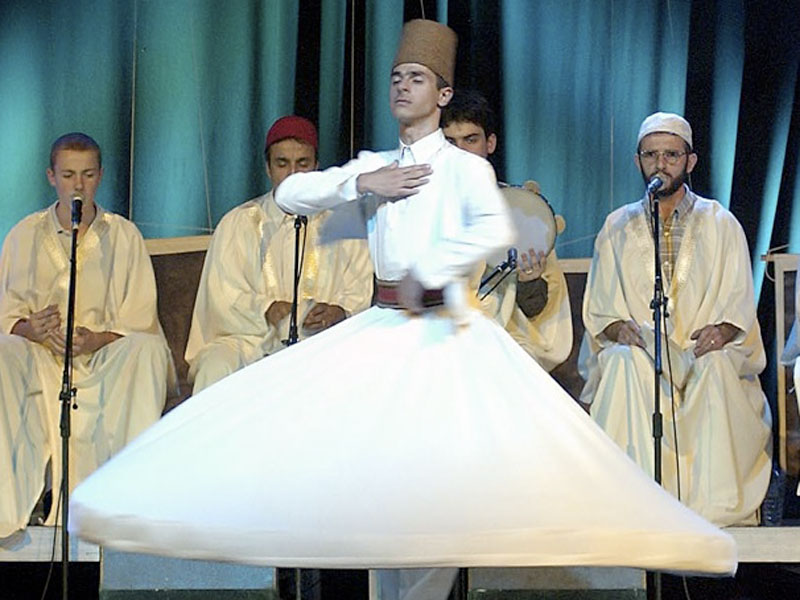 Vibrant footage of the Al Taybah Ensemble, shot in early 2009, brings to life the Sufi musical tradition of connecting with the Divine.