Born in Kuwait in 1972, Sulayman Al-Bassam graduated from Edinburgh University and went on to found Zaoum Theatre in London in 1996. Sabab Theatre is the Arabic arm, established in Kuwait in 2002. Led by Al-Bassam and working alongside mixed groups of Arab and Western performers, the company's work challenges, questions and celebrates the complex relationship between the Arab world and the West.

In 2004, Al Bassam created the award-winning Al Hamlet Summit followed in 2006 by Kalila wa Dimna; The Mirror for Princes. The company performs regularly to audiences in the UK and at international festivals across the Middle East, Europe and South East Asia. Al Bassam's work, which he produces in both English and Arabic, has been published in various languages and the study of his work forms part of higher education curricula at universities in the United States and the Middle East.

Al Bassam lives and works in Kuwait where he leads The Culture Project, a private arts development agency aimed at fostering the infrastructure and quality of live arts in Kuwait and the Gulf region. Future projects include a bi-lingual production of Troilus & Cressida with the Royal Shakespeare Company, UK and a new commission The Petrol Station. 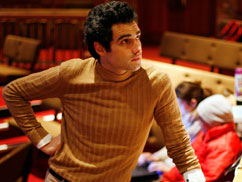 Sulayman Al-Bassam discusses his interpretive work, Richard III: An Arab Tragedy and the implications of bringing Shakespeare to the Arab stage.